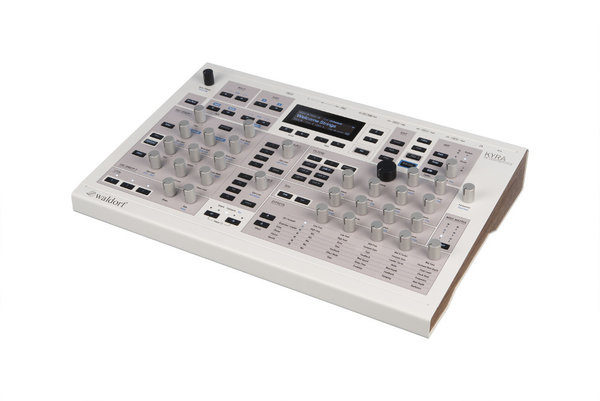 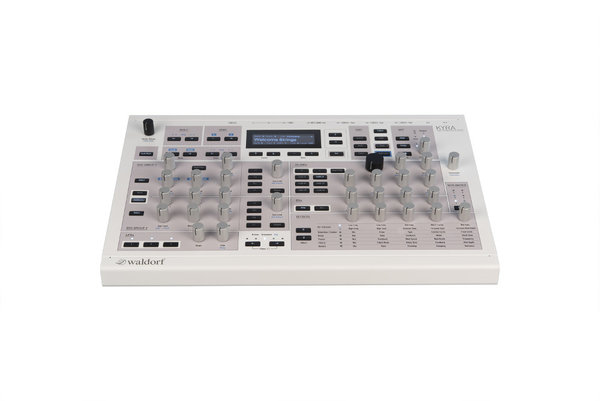 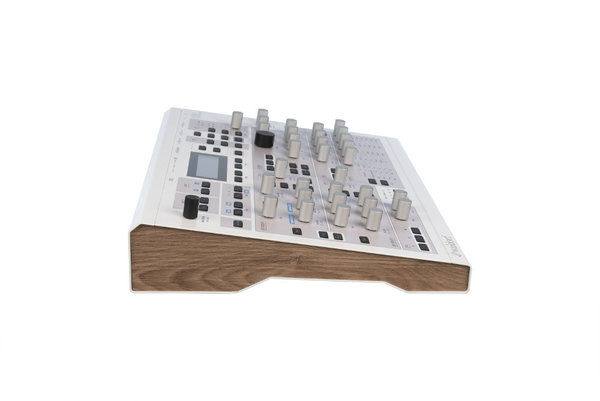 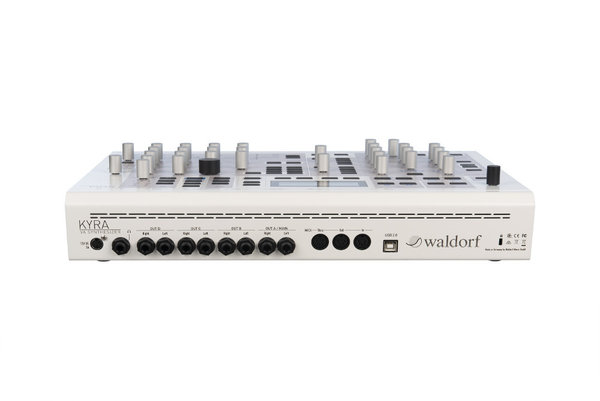 Kyra is a powerful, hardware virtual analog synthesizer capable of creating a wide range of contemporary sounds for live and studio musicians.

From first glance it is patently obvious that Kyra is a beautifully-designed desktop VA Synthesizer — as the wording elegantly emblazoned on its eye-catching front fascia subtly states. As a truly multitimbral instrument it features eight independent ‘parts’ with up to 32 notes per PART, each effectively being a complete synthesizer with sound sources (OSC GROUP 1, OSC GROUP 2, SUB 1, and SUB 2); FILTERS; modulators (EGs, LFOs, and MOD MATRIX); multi-effects unit (EFFECTS); and a USB 2.0 connection — can exchange MIDI (Musical Instrument Digital Interface) information, as well as send the audio from each stereo PART to a computer as eight stereo 24-bit streams at 96kHz (with 48kHz downsample mode available) and one stereo audio return from the computer supporting a single 24-bit stereo audio stream from the host DAW (Digital Audio Workstation). With that being said, the only other resource they share are the four balanced, stereo output pairs — OUT A (Right and Left), OUT B (Right and Left), OUT C (Right and Left), and OUT B (Right and Left) — using 32-bit DAC (Digital-to-Analogue Conversion) running at 96kHz sampling rate connected to four internal stereo busses and that powerful pool of 128 hardware voices. Versatility further abounds as each PART has a dedicated multi-effects unit comprising nine stereo effects modules — namely, three-band EQ, Formant filter, input Limiter, Distortion module, Delay module, six-state Phaser, Chorus flanger, Stereo reverb, and output Limiter — with dedicated audio stream via USB (Universal Serial Bus).

Patches
Better still, each PART hosts a Patch from the pool available to the system. Speaking of which, Kyra has a generous Patch storage capacity of 26 banks — A through to Z, each containing 128 patches. That’s a total of 3,328! The first seven banks are ‘user’ patches stored in RAM (Random Access Memory), meaning users can change them quickly and individually using the Store sequence. The remaining 19 banks are ROM (Read-Only Memory) patches that users can recall and use just like RAM patches but cannot be replaced using the Store sequence. It is, however, perfectly possible to freely copy whole banks between RAM and ROM, so all are user- programmable. And any Patch can be recalled via MIDI program changes and Bank select commands.

Get this, though: switching from Wave mode — meaning Kyra adopts a virtual analogue synthesis model which has the advantage that it is easy to construct sounds using intuitive subtractive synthesis — to Hypersaw mode configures the voice to use a special algorithm comprising six real oscillators to quickly create lush-sounding soundscapes. Digging deeper, Hypersaw mode replaces Wave mode’s two oscillator groups with a single source whose tonal content is constructed with just two adjustable controls — Hypersaw Intensity and Hypersaw Spread (geometric detuning). Built entirely out of multiple, harmonically-rich sawtooth waves or ‘partials’ each adjusted to that special algorithm, the Hypersaw provides characteristic soundscapes ideal for a wide range of uses — from high-impact lead sounds through to lush, animated pads. Placed in Dual Mode, the Hypersaw has 12 real oscillator sources with an additional adjustable stereo spread.

Envelope and LFOs
Onwards and upwards, three fast-response ADSR (Attack, Decay, Sustain, Release) envelope generators with EG Slope setting are also at hand. Helpfully, one is assigned to the VCA (Voltage Controlled Amplifier), another to the filter, while the third can be freely assigned. All are available in the MOD MATRIX (modulation matrix), itself being a six-channel affair with up to three destinations per channel giving a maximum of 18 routings. It is also worth noting that the three LFOs (Low Frequency Oscillators) — with 128 waveforms, monophonic, polyphonic, random, anti-phase, and quadrature stereo phase settings — are also available in the MOD MATRIX and additionally as a MIDI clock sync source.

Arpeggiator
Creativity continues courtesy of an arpeggiator (ARP) on each PART with 128 preset patterns; Up, Down, Random, and Chords modes; and an ability to synchronise to MIDI clock. Arpeggiators are aimed at live performance, primarily, but can clearly complement composition. Kyra’s ARP is an integral part of a Patch, so settings are always stored.

Display and Connections
Far from forgetting its helpful high-resolution 256x64 pixel graphic OLED (Organic Light-Emitting Diode) display alongside the traditional array of MIDI In, Out, and Thru connections — complimenting USB 2.0 — on five-pin DIN, as well as full key microtuning capability with MIDI Tuning Standard (MTS support), it is fair to say that Kyra is, indeed, one of the most powerful music synthesizers ever built... a sensational synthesizer with a spectacular specification, set to take performances and compositions to higher states of musicality and sound design!